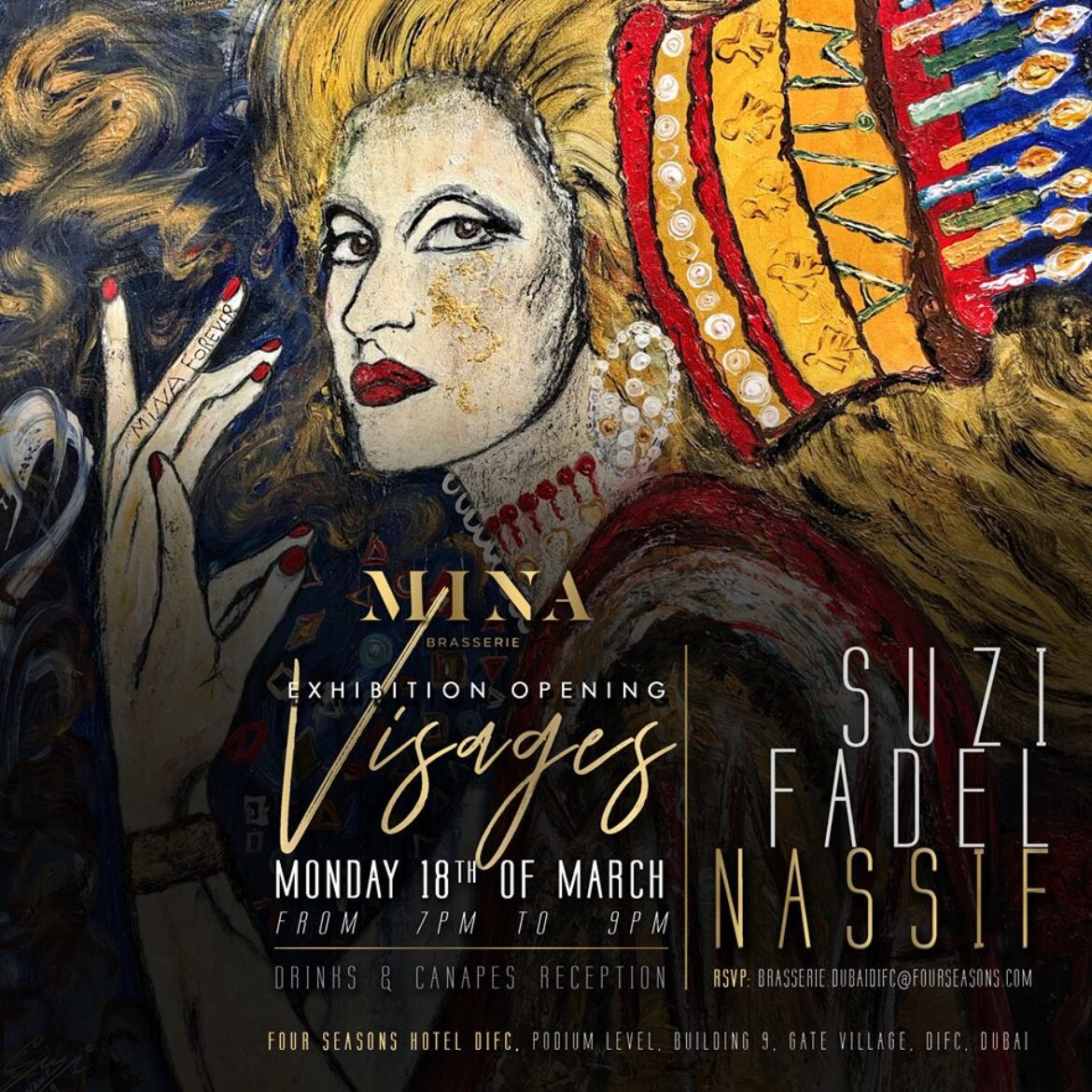 Mina Brasserie is an excitingly new and modern brasserie for lunch and dinner and is working in conjunction with Chef Michael Mina, an award winning chef. Expect great dining experience here as you will be served delicious and sumptuous dishes while you sit on comfortable couches in a lively and sophisticated environment. Now if you are an art lover and love to come dining at the Mina Brasserie, why not make a reservation for an upcoming art event that is to take place at the Brasserie scheduled for the 18th of March, 2019?

The famous Dubai artist Suzi Nassif is back at it again doing what she knows best which is showcasing some of her latest artwork. She is going to be featuring at the Mina Brasserie, the Four Seasons Hotel/ DIFC as from 7pm to 9pm on Monday the 18th of March 2019. Suzi Nassif is famously known for her impressive artworks and has featured in numerous prestigious world art exhibitions. Well, so much is expected of the artist who is known to create various forms of artwork ranging from Surrealism, abstract expressionism, nude-surreality, etc.

Suzi is natively from Lebanon but she emigrated to the UAE where she continues to do her artwork inspiring women across this area of the globe where women artists have to work extra hard in order to be noticed due to cultural barriers. Indeed her artwork never fails to include women’s issues and thus serves the purpose of inspiration to them. Suzi Nassif uses acrylics and oil as her preferred mediums something that has made her become an international icon to reckon with. Since she started her professional painting career in 2014, she has featured in various many world art events and awards.

Among some of the most prestigious art awards she has participated in and won awards from include; Vera Award (she received it in 2015), UNICEF Award, Leonardo Da Vinci Award, Casanova Arts Lover (she received it in 2016), and the Palm Award (2017). With all these it is without doubt that Suzi is one contemporary female portrait that is has achieved a great deal accolades that even some of her male counterparts haven’t been able to achieve in a seemingly very short span of time.

Back to the Visages Exhibition opening at the Mina Brasserie Four Seasons Hotels Dubai in which she will be showcasing some of her most recent works of art, revelers can only expect the best from her. Of course she has so much to offer and those going for the art event are certainly expecting nothing but only her best. In order to get a chance at the grand art event you can go directly to http://www.minabrasserie.com/#. You can then make your reservation for the event that is scheduled for the 18th of March 2019. It is expected to commence at 7.00pm to 9.00pm, the dress code is smart casual.