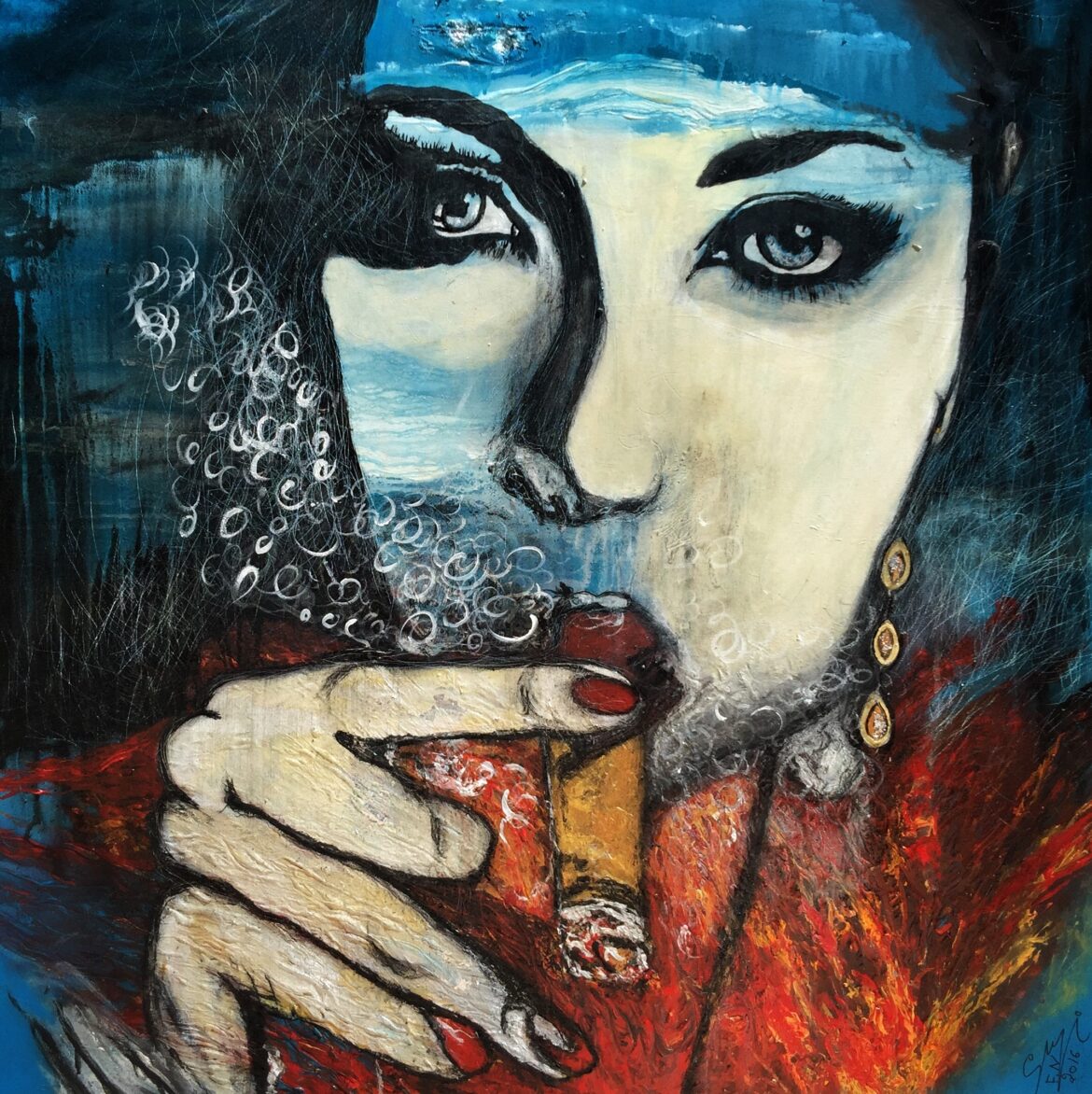 The vivid collection includes depictions of Latin American spirits, faces and backgrounds, in an artistic manifestation of Latin American culture through which you can almost read a special dialogue in each work, about themes such as Love, Art, Life, Challenge, Culture and Differences. Many include famous historical faces from different eras like Fernando Botero, Frida Kahlo, Salvador Dali and “Che” Guevara, who, in a one way or another portray the Latin American world.

“It was poetic and theatrical to plan an unusual rendezvous between those great immortals from different times to communicate and live vividly on the surface of my canvas” says the artist whose fascination with Latin American cultures, with which she strongly identifies, began at an early age.

“I used to make little illustrations on my notebooks of people with colorful clothes and hair garments and a mix of gypsies or “gitanas” and Mexican moods. Totally fascinated with their fashion, music, food, art, traditions, struggles, paradoxes, social, political and cultural heroism, I could not but be inspired to create a tiny fragment of that rich culture, especially after my trip to Cuba four years ago for the Havana biennial.” This fascination led her to her Latin American project.

“I started a journey of discovery mainly into Latin Art history, read dozens of books, watched many documentaries, studied deeply the intense life of Frida Kahlo, and contemplated her paintings to an extent I felt I want to paint a Frida in almost every canvas! The title of this exhibition was inspired by her last written words on one of her paintings only few days before she died, she wrote: “Viva la vida” and because I have this intense love affair with Latin American Art I added: “Viva el Amor”!

The artist grew up in Lebanon and now lives in Dubai, UAE. Driven by her early passion for drawing and painting she went on to study courses in photography and graphic design and she experimented continuously with art subjects in various mediums which pushed her to expand her horizons and tap into new areas of painting. Art has been, and continues to be, the main outlet for her feelings; she was deeply attracted by the effects of colors, textures and emotional echoes through to strong composition and design. Today, Suzi’s work is a bold mix of styles and colors and each artwork tells a unique story. She realizes, visualizes and expresses her thoughts and emotions in various media, which include oil, acrylic, photography, and digital art. She brings a subtle and sophisticated feel to her paintings through a special balance of color, composition and texture. Her main goal is to create living emotions in her paintings.

Suzi has participated in various art events in Dubai and worldwide where she displayed a variety of conceptual artworks. She has also auctioned her work in different charity organizations for great noble causes and commissioned art for various audiences in the Middle East. In October 2015 she won the Vera fine art festival Award in the category of Painting amongst many international artists.

Attached to London’s first Peruvian restaurant and Pisco Bar, Coya Members’ Club is the destination for those looking for a premium club environment embracing diversity, substance and creativity. The Coya Collective brings together a very active and innovative culture and music programme of events associated to Latin America. Coya is keen to promote fresh ways to engage with the arts and to introduce Coya members to the less known artistic avant-garde, with rendez-vous for culture and art aficionados regularly held in the Members’ Club (INCApades, film club, exhibition openings, performances…) and in town (Art Escapades, VIP tickets…). The programme offers guests the opportunity to engage with a variety of Latin America themed activities in an intimate exchange with key influencers and in close collaboration with London vibrant art scene.